The Music Man was a huge success.  Thank you for your support of the ARTS in Victoria!

See many photos from the shows follow this link: https://www.visd.net/apps/albums/school/0/187507?uREC_ID=0&backTitle=&backLink 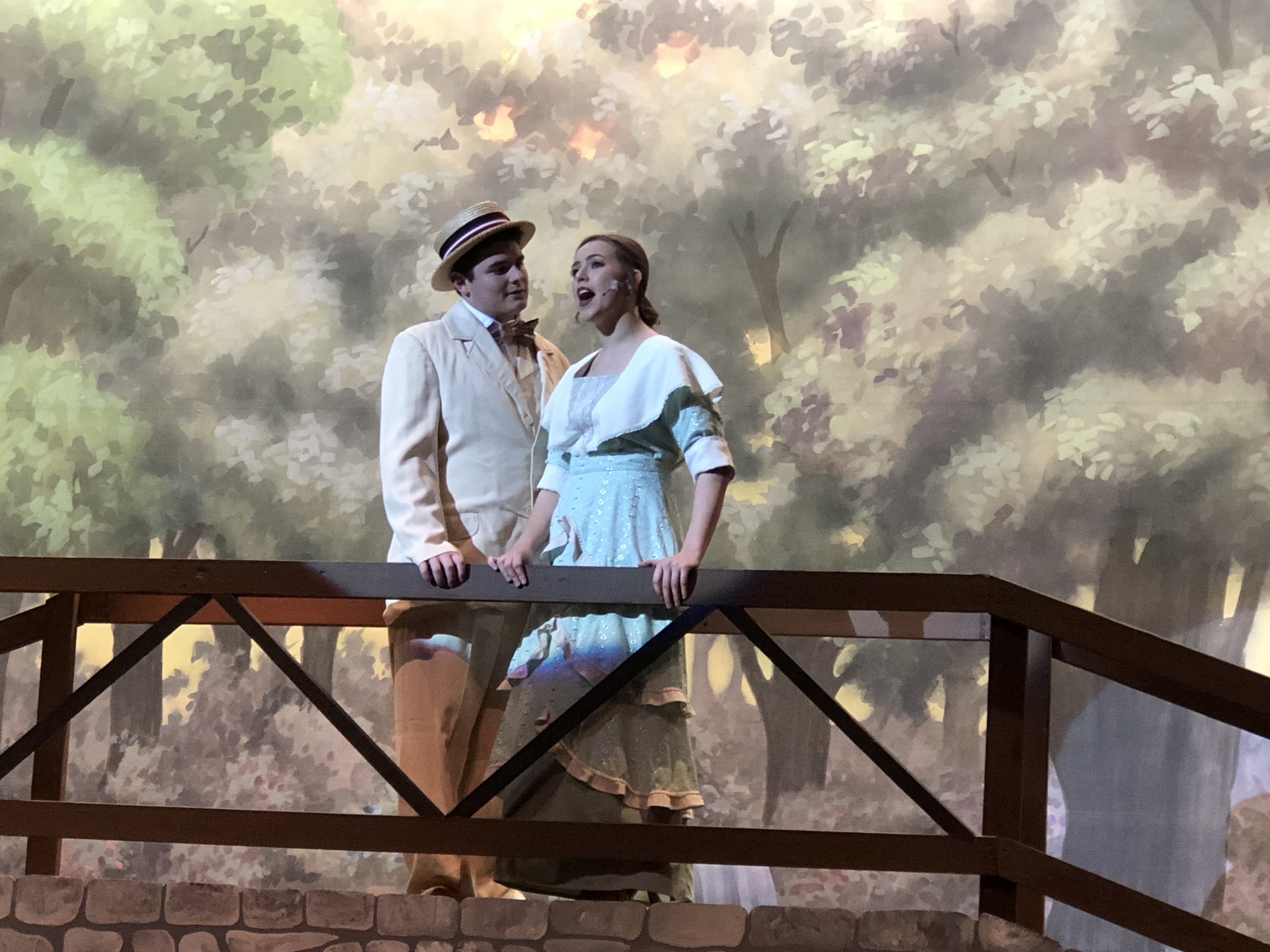 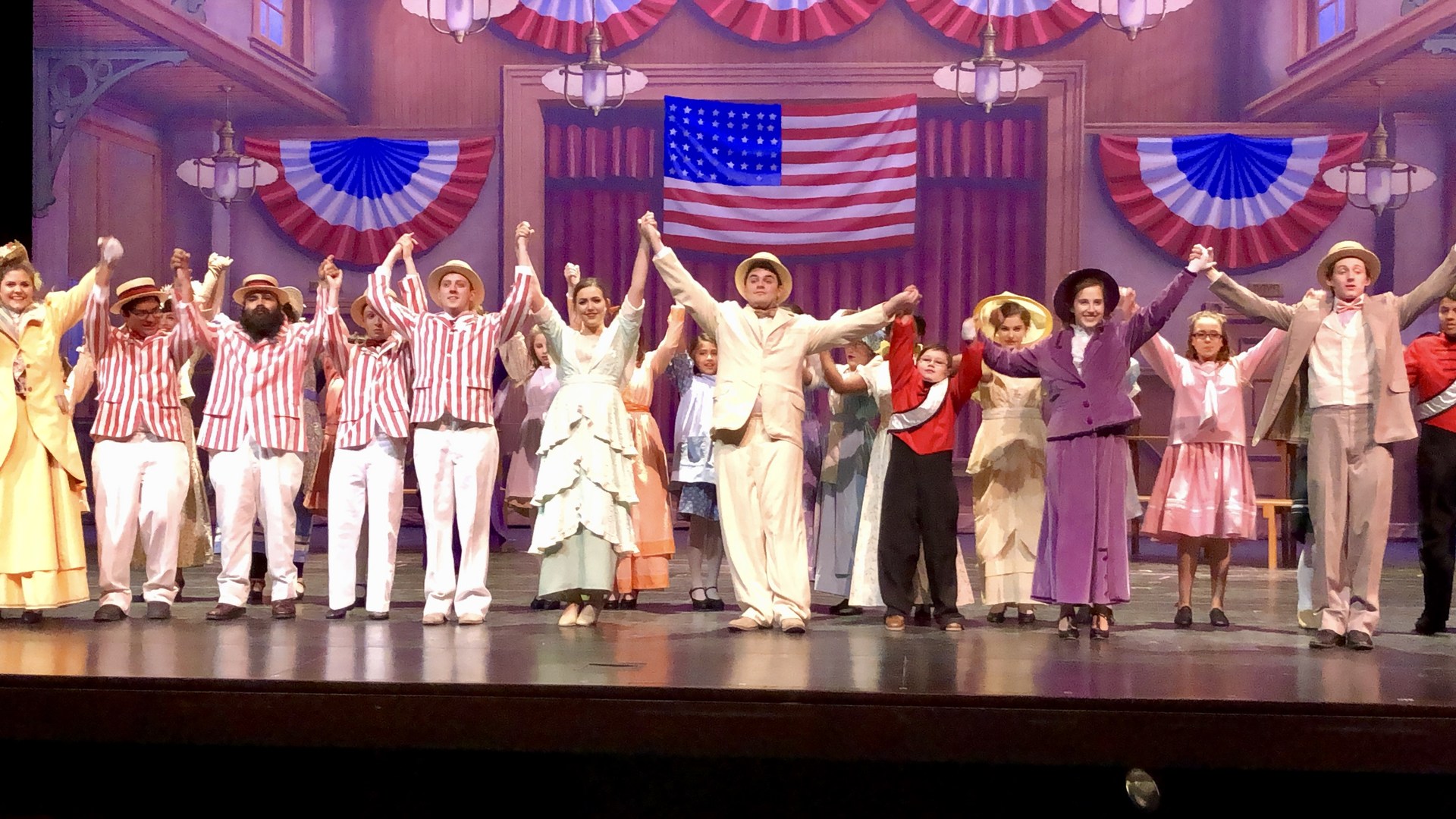 The Music Man is family entertainment at its best. Meredith Willson's six-time, Tony Award-winning musical comedy has been entertaining audiences since 1957 and is a family-friendly story to be shared with every generation.  VISD will be performing the Original Broadway Version of 1957.

The Music Man follows fast-talking traveling salesman, Harold Hill, as he cons the people of River City, Iowa, into buying instruments and uniforms for a boys' band that he vows to organize – this, despite the fact that he doesn't know a trombone from a treble clef. His plans to skip town with the cash are foiled when he falls for Marian, the librarian, who transforms him into a respectable citizen by curtain's fall.  Read the Full Synopsis of the musical

The 2017 VISD's Fine Arts District Musical was The Sound of Music.  VISD Performances were on Friday, January 13th, 14th & 15th in the Victoria Fine Arts Center. 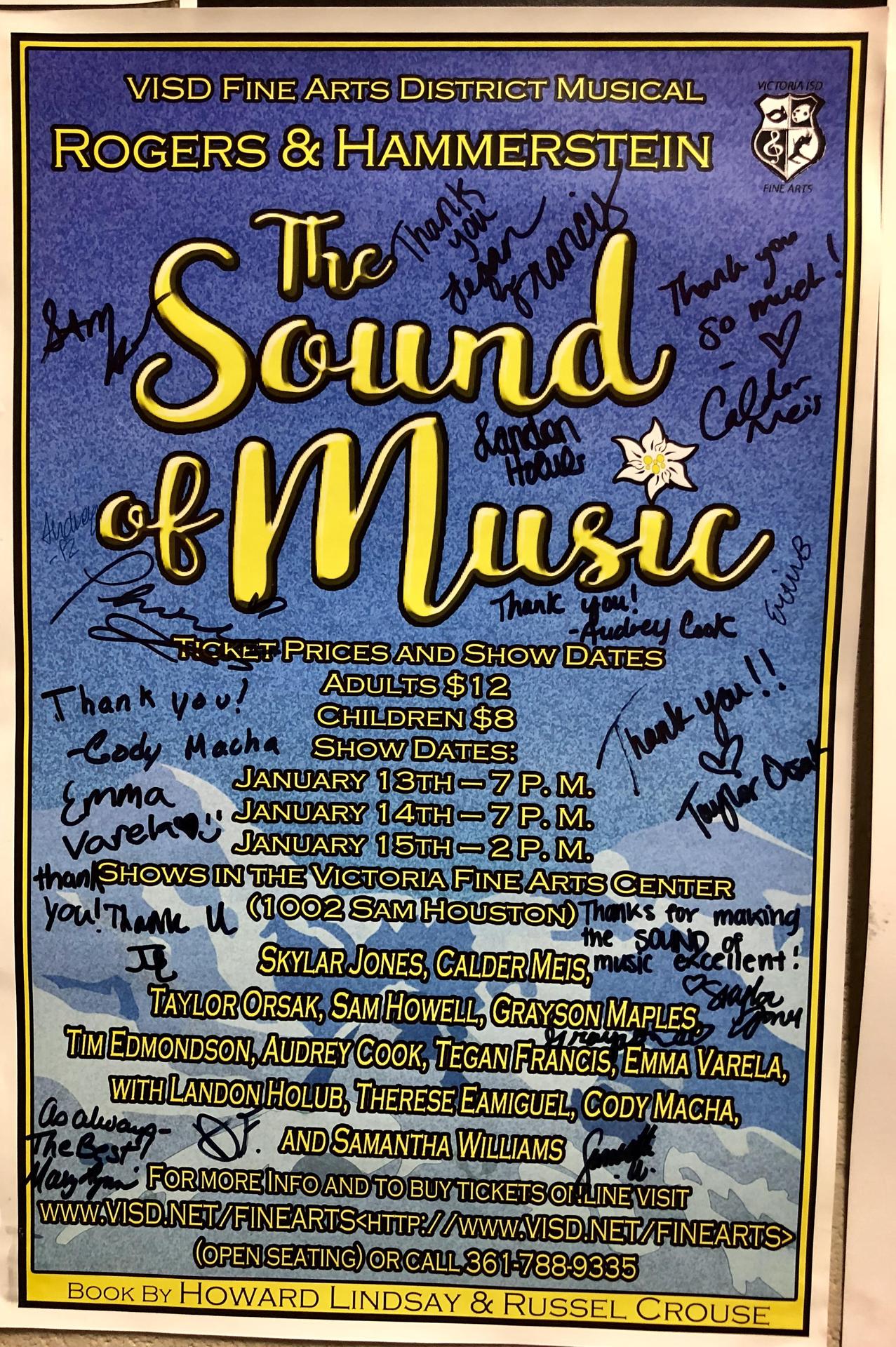 VISD’s District Musical was produced by the “Westside Production Crew”

The Sound of Music is a musical with music by Richard Rodgers, lyrics by Oscar Hammerstein II and a book by Howard Lindsay and Russel Crouse. It is based on the memoir of Maria von Trapp, The Story of the Trapp Family Singers. Set in Austria on the eve of the Anschluss in 1938, the musical tells the story of Maria, who takes a job as governess to a large family while she decides whether to become a nun. She falls in love with the children, and eventually their widowed father, Captain von Trapp. He is ordered to accept a commission in the German navy, but he opposes the Nazis. He and Maria decide on a plan to flee Austria with the children. Many songs from the musical have become standards, such as "Edelweiss", "My Favorite Things", "Climb Ev'ry Mountain", "Do-Re-Mi", and the title song "The Sound of Music".

VISD will hosted a Full Musical Pit of VISD students performing as a part of the musical.

Another feature of this joint effort was our VISD Educational Theatre outreach program on January 12th for our elementary schools. We created a special production for the VISD 5th graders, showing what it takes to create a student created musical.  In addition, there was a Q&A with our high school performers.

This musical comedy which centered on a fictional spelling bee set in a geographically ambiguous Putnam Valley Middle School. Quirky adolescents compete in the Bee, run by equally quirky grown-ups. An eclectic group of mid-pubescents spellers work their way through a series of [potentially made-up] words hoping to never hear the soul-crushing, pout-inducing, life un-affirming “ding” of the bell that signals a spelling mistake. Each has a distinct personality that contributes to the intrigue as the spelling bee unfolds. Well, at least the losers get a juice box! 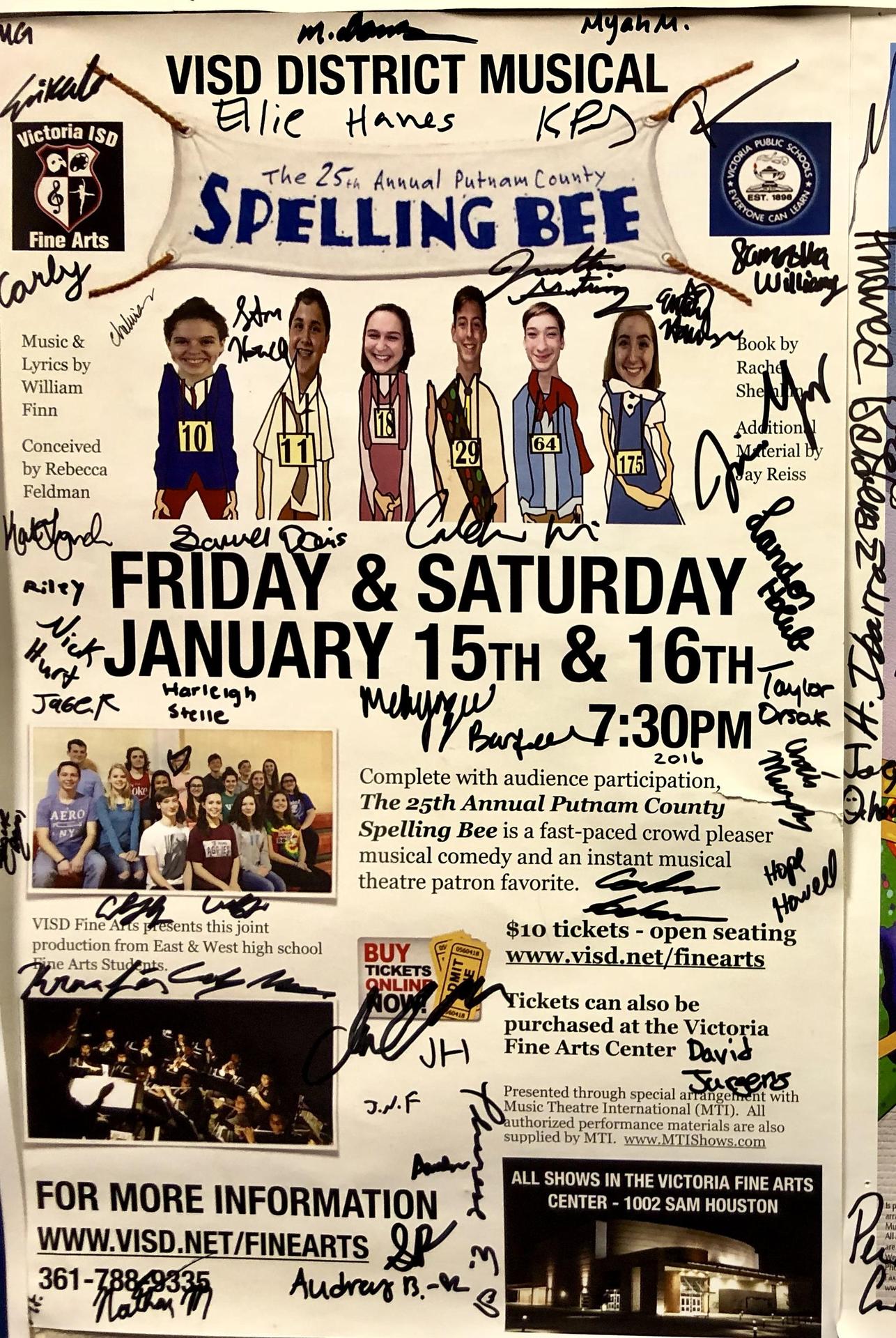 Again this year, VISD had a full musical pit of VISD students performing as a part of the musical.  Special note - This show traditionally is scored for five musicians (piano, percussion, woodwind performer and Cello).  Mr. Peach has scored it for full band and orchestra (woodwinds, brass, orchestra strings and percussion) so that over 30 of our VISD students musicians can participate in the musical pit.

Our District Musical each year is a VISD student centered production with all actors, props, set pieces, art work, sound, lighting, technical components and the full pit of musicians.

Another feature we added was the VISD Educational Theatre outreach program for elementary schools. We produce a special production for the VISD 5th graders, showing what it takes to create a student created musical. There was a Q&A with students as well as an opportunity for them learn about what fine art electives are available for them as they move into our secondary VISD schools.

We premiered our first District Musical, Little Shop of Horrors in 2014 and staged Roald Dahl's Willy Wonka in 2015. 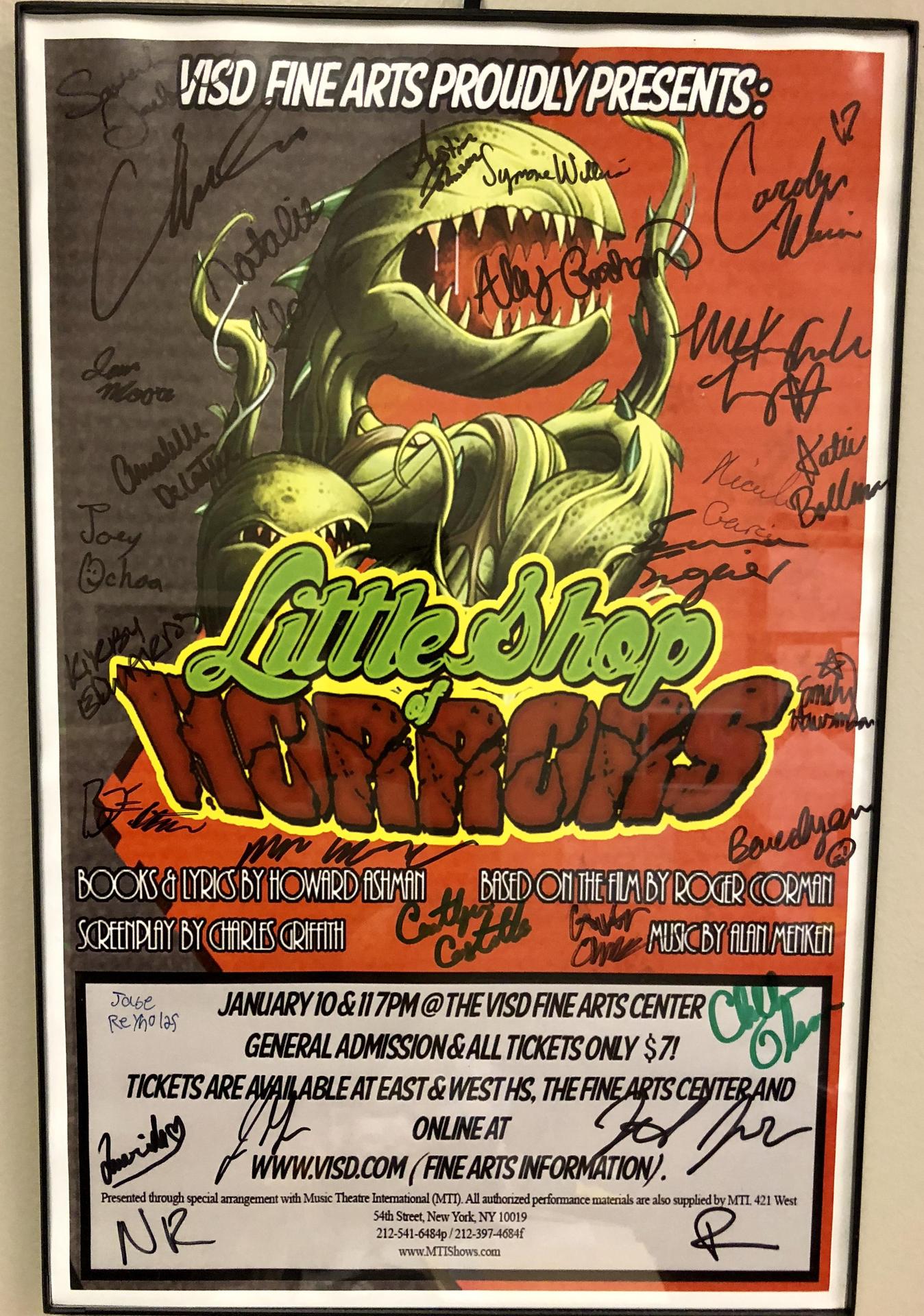 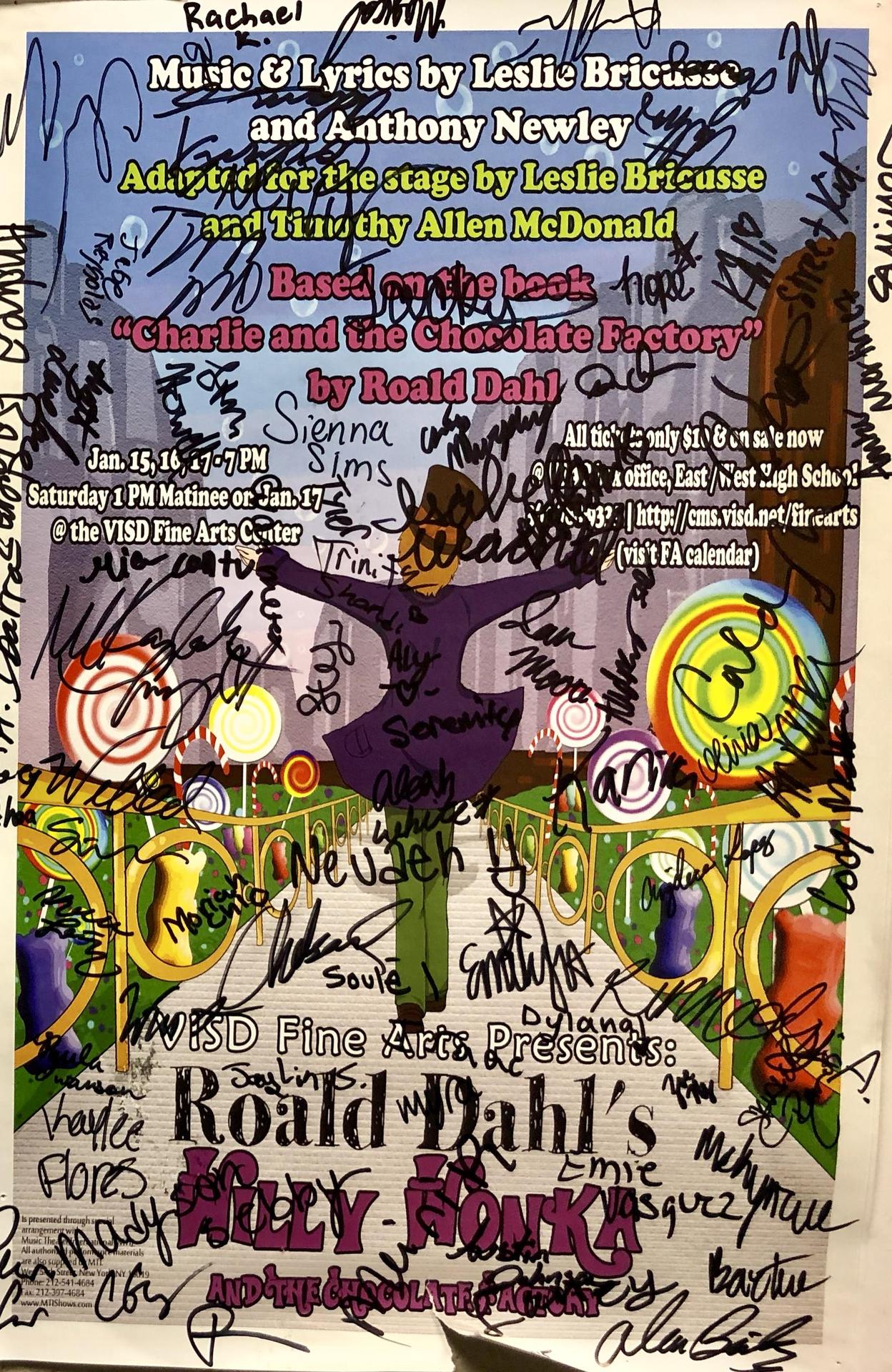